EVGA's latest concept case is huge, capable, and may actually be a legit "VR-Ready" PC case.

Thermaltake's new fan now features RGB LED lighting. Its latest case was the result of a collaboration between the company and a case modder, and there are plans to mass-produce it.

Antec announced several new additions to its cooling lineup, including an economy series, a triple-tower solution, some big closed-loop coolers, and even a new (for Antec) open-loop cooler.

Tor Browser 6.0 is now available for all the major desktop operating systems with DuckDuckGo search engine support by default and other new Firefox-related improvements.

In a dimly-lit corner in a room in Gigabyte’s massive suite in the Taipei 101, I found Gigabyte’s forthcoming XK700 mechanical keyboard.

Hey everyone! We've got another great Steam giveaway for you. This round, we're bringing you three copies of Valkyria Chronicles!

Patriot revealed a new series of Viper-branded DDR4 SO-DIMM memory kits during Computex. The new RAM is designed to offer increased speeds with 8 GB and 16 GB modules clocked at 2400 and 2800 MHz.

Drone 100, Intel’s world-record-holding drone performance, will be making its public debut as part of Vivid Sydney. For five nights only, June 8 to 12, 100 illuminated drones will perform a spectacular choreographed routine over Sydney Harbour, accompanied by the breathtaking sounds of the Sydney Youth Orchestra.

When its inaugural flight took place in November 2015 in Hamburg, Germany, Drone 100 set a Guinness World Record for the most unmanned aerial vehicles (UAVs) flying simultaneously. Now, Drone 100 will push the limits of what it has previously achieved, performing for the first time ever above water, in front of a live, public audience in the heart of a major city with the Sydney Opera House sails as a backdrop for this unique performance.

Weather permitting, Drone 100 will light up the skies above Sydney Harbour in a 7-minute performance each night starting at 8 p.m. Flying in dynamic formation, the drones will showcase different shapes and colours to reveal a never-seen-before bespoke animation designed specifically for the Sydney performance. Controlled by one main pilot, the performance will be synchronised to Beethoven’s Fifth Symphony, performed live by the Sydney Youth Orchestra, to create a magnificent display of art and technology.

“With drones quickly emerging as an important computing platform of the future, Drone 100 exemplifies what it means to reinvent experiences with new technology,” said Anil Nanduri, Intel’s general manager of unmanned aviation systems for its Perceptual Computing Group. “Drone 100 will capture the imagination of all who see it. Through this experience, we hope to inspire the imagination of Vivid Sydney festivalgoers and highlight the future potential of drone technology.”

As a Major Partner of the Sydney Opera House, Intel will set up a VIP viewing area for this special event on the eastern side of the Opera House podium overlooking Farm Cove. For those interested in seeing Drone 100, Intel will release a limited number of tickets for each of the five nightly performances to be viewed from this prime harbour-side position. All tickets will be free of charge, with a maximum of two tickets allocated per person. Details on how to secure tickets will be shared on Intel’s Drone 100 Facebook event page.

As this event is weather-permitting, performances on any given night are not guaranteed.

Aside from showcasing creative expression, Drone 100 highlights the exciting future of UAVs, including the different ways they could be integrated into different industries. Examples include:

The future potential of drones in society will also be discussed at a Vivid Ideas Panel on June 8: Drones for Good.

Now in its sixth consecutive year as Vivid Sydney partner, Intel’s footprint will spread across other Vivid Sydney activities, promising to deliver interactive engagement to audiences with each element of the festival’s programming – light, music and ideas. Intel is also a Major Partner of the Sydney Opera House and a Major Event Partner of its annual contemporary music takeover Vivid LIVE.

Drone 100 is weather-dependent and will not go ahead in the event of rain, storms or high winds. Keep an eye on Intel’s Drone 100 Facebook event page for updates.

See the video of the previous Drone 100 performance in Germany. 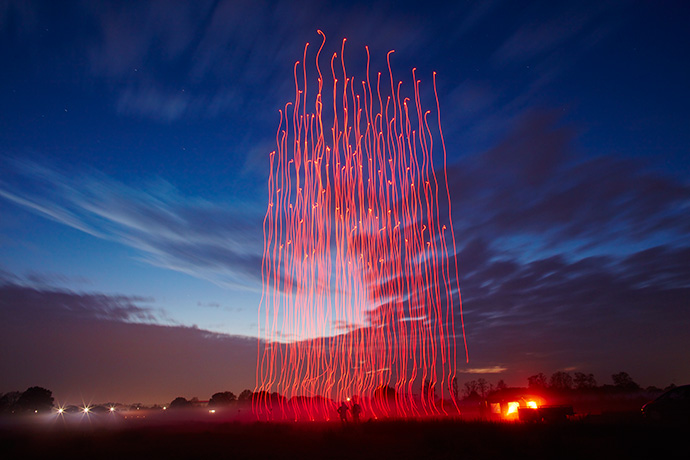 In its sixth consecutive year as Vivid Sydney partner, Intel technology will once again power some of the most exciting and innovative installations at Vivid Sydney. Intel is renowned for its previous Vivid Sydney activations such as collaborations with international superstars like will.i.am and local light artists, including 32 Hundred Lighting and Spinifex. These visually stunning installations gave the public a chance to play and interact with iconic Sydney architecture like the Museum of Contemporary Art Australia, Customs House and the Sydney Harbour Bridge. www.vividsydney.com/intel

Vivid Sydney is the world’s largest festival of light, music and ideas, which for 23 days – from 27 May to 18 June 2016 – transforms the Harbour City with its colourful creative canvas.  Now in its eighth year, and owned and managed by Destination NSW, the NSW Government’s tourism and major events agency, Vivid Sydney features large scale light installations and projections (Vivid Light); music performances and collaborations (Vivid Music including Vivid LIVE at the Sydney Opera House); and creative ideas, discussion and debate (Vivid Ideas), all celebrating Sydney as the creative hub of the Asia-Pacific. For more information visit www.vividsydney.com

EVGA showed off its new GTX 1070 design at Computex 2016, along with a few other nifty little gadgets.